Stark Industries cards are temporarily or permanently strengthened when you upgrade the shop. Upgrade the shop quickly to defeat opponents with high-leveled cards.

If you got [Iron Man Model 1] and [Madame Masque] in the first two turns or upgraded one of them to Star-Level 2, you can spend turn 3 and 4 upgrading the shop.
In the second or third turn, you can choose [Iron Monger] to join your front line to be your first step of building a Stark Industries front line. Star Level 2 Iron Monger gains +2 Power whenever a Stark Industries character is played.
Its Power can be raised pretty high, and with its Critical Hit skill you can count on him to quickly defeat opposing <Guardian> characters. 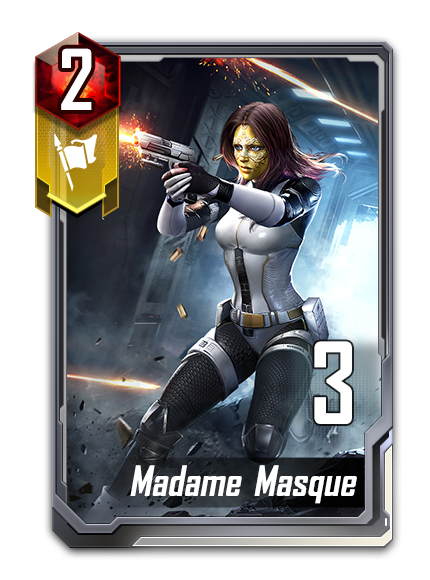 Star Level 2 [Madame Masque] gains you up to 16 Health.
She is rather weak on herself, so you can consider selling her at shop level Lv.5.

When played, can provide up to 12 bonus Power.
Playing him basically means you're winning this turn. Playable in all kinds of front lines, don't hesitate to purchase him when available. All damage dealt with this equipment ignores Armor, directly striking the opponent's Power, even ignoring the Iron Will skill.
If you are facing an Armor-heavy Asgardian front line, be sure to play a double of these in your deck.