Use characters that deal skill damage before action, such as [Ronan], [Captain Marvel] and [Supreme Intelligence]. Give them [Moonstones] to boost their power after dealing skill damage.
Use your Super Hero Skill or Pow Card Photon Force Field to increase Action Times for these characters to make them even stronger.
Play [Kamala Khan] and [Mar-Vell]. Their Power boosts quickly when other characters deal skill damage.

The front line requires synergy among multiple Characters, and can take patience to build up.
Can be countered by sweepers and other fast pace strategies like <Assault>.

If you saw [Minn-Erva] in the first three turns, it's always fine to purchase her. If you got [Kamala Khan] for 3, you can start to look for <Support> Equipment and Characters that deals skill damage. Battle can be slow in this stage, giving [Kamala Khan] ample time to grow.
After you purchase [Yon-Rogg] and [Ronan] for 4, you can deal a lot more skill damage. Core card in the early game, all cards that deals skill damage can synergize with her, not limited to the cards of this strategy.
After reaching Star Level 4, she can be the late game core card of the Last Words strategy. The ceiling of this card is decided by the deck's total Skill Damage. The <Intergalactic War> can deal a lot of skill damage, so this card has a very high ceiling in this deck. 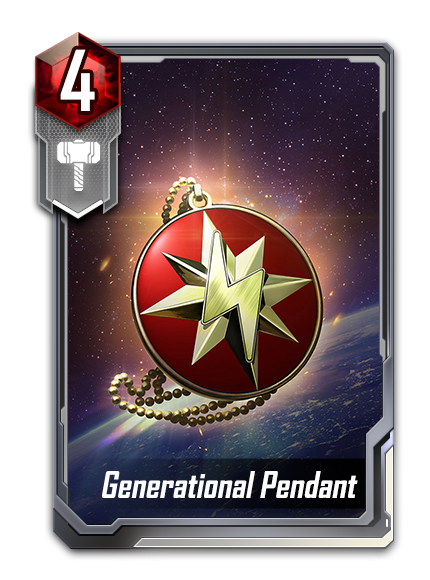 Can greatly increase the toughness of your front line, worth a shot in all kinds of decks, not just <Intergalactic War>. An extra action point actually matters in late game, worth a shot in all kinds of decks, not just <Intergalactic War>.