Increase Thor and Hogun's Armor. They can convert Armor into Power in combat.

Good at defense; can quickly gain the upper hand over opponents whose Power isn't strong enough.

This deck's Power is concentrated in few main cards. If these cards are defeated or fall under your opponent's control, the deck loses all its potency.

[Thor] can be purchased from the Lv. 5 Shop.
Increasing [Thor]'s Armor is equivalent to increasing his Power. As long as he has high Armor, he can defeat all opponents single-handedly!

Throg: If he's equipped with [Mjolnir], when dealing damage, his effects will also be triggered.
If you don't have [Mjolnir], [Hofund] works too.

Lady Sif
Gives characters on both sides an Armor boost.
Equip Lady Sif with [Silver Sword] or [Hofund] to increase her chance of surviving after taking an action.

Valkyrie: Equip her with [Gungnir]
If you don't have [Gungnir], give her other Support equipment.

Hogun: Equip him with [Captain America's Shield] or [Asgardian Shield]
If he has a high Star Level, Hogun can be used as a Guardian character.
If you don't have [Hogun], you can replace him with other Guardian characters, such as [Guard Army of Asgard]. During Preparation Phase, you can increase Thor's Armor by acquiring [Jane Foster], [Shuri], or [Korg]. During battle phases, use [Mjolnir], [Lady Sif] or [Hulk] to boost Thor's Armor. A less powerful Thor alternative.
A Super Card Hogun is strong enough to be part of the final front line. He makes a fine Guardian, at least. 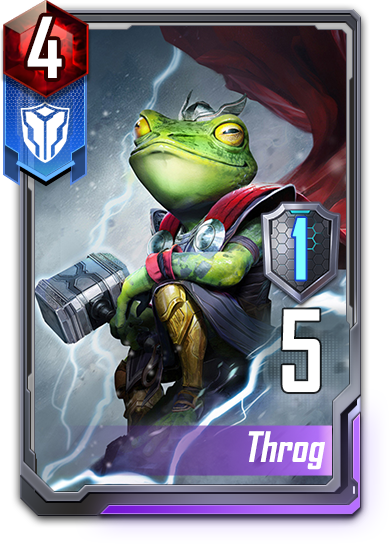 His "Iron Will" effect helps him use his Power more efficiently.
Equip him with [Mjolnir] or [Hofund] or use him with [Lady Sif] to deal extra damage. Can boost the Armor of characters on both sides by a considerable amount.
Can take multiple actions when combined with Thor's Super Hero Skill.